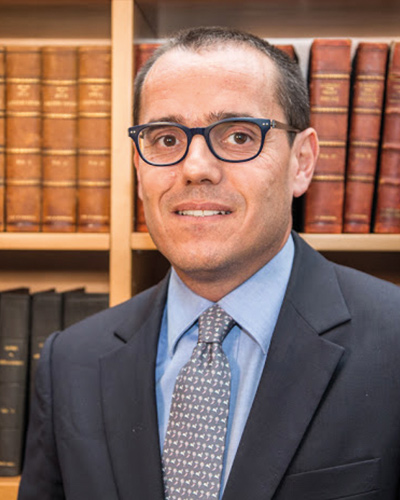 – Full Professor of Private Law at the Department “Management and Law” of the University of Rome “Tor Vergata” since 2006-07.

– Researcher of Private Law, at the Faculty of Economics of the University of Rome “Tor Vergata”, since 1999.

– Deputy Director of the Department “Management and Law” of the University of Rome “Tor Vergata” from the academic year 2015-16 until May 2019.

– Lawyer of confidence of the Swiss Embassy in Italy.

– General Counsel of the Commissioning Body, as well as member of the Supervisory Body, in extraordinary administration procedures, also pursuant to the so-called “Marzano Law” (d.l. 347/2003), inter alia, with regard to companies operating in the essential public services sector (in particular, in the healthcare and I.R.R.C.S. sector).

– Trustee in bankruptcy, judicial commissioner and liquidator of insolvency proceedings (e.g. in the public transport sector or for the disposal of substantial real estate assets, inter alia, in the high-end hotel sector).

– Board member and voluntary liquidator, instrumental to the preparation and implementation of business crisis recovery procedures, including banking.

– General Counsel of private entrepreneurial groups, operating in the real estate development and requalification sector, with specific regard to the sector contracts (depending on the negotiation “tool” used: purchase and sale of the property, the company’s shareholdings, the company) and the related due diligence activity.

– General Counsel of leading international groups, also listed, in the fashion industry, with direct assistance in “matters” of domestic law, having specific regard to the area of contracts lato sensu of “distribution” (sales contracts, distribution, agency, business procurement, etc.), as well as with the role of coordinator of the activity of legal assistance and advice rendered in multiple foreign jurisdictions.

– Assistance, both in and out of court, in bankruptcy proceedings (actions to void, actions for damages, complaints against bankruptcy decisions, etc.).